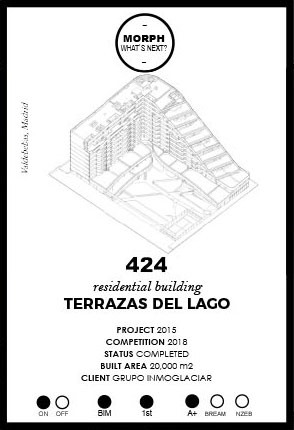 The idea is initiated by the limitations of the regulations, 75% of the facade had to be aligned with the site line, so there was only 25% facade line to play with. That was when the first gesture was drawn, a curved junction between two aligned facades. Absurd? If the regulation had forced a 100% alignment, we would not be talking about Terrazas del Lago and if it gave a degree of freedom, surely the project would have been more risky and maybe it would not have seen the light.

The next movement is caused by the location and orientation of the site. The plot has a huge park in its southern side. Two powerful magnetic poles that determine the shape of the building are added to this orientation.

Another factor that intervened was the deep financial crisis in which we were sunk in Spain. In that moment, the focus of the real estate product had completely changed and the concept of housing was redefined to convince the few buyers in the market who were willing to invest in a house.

The answer to these conditions was to orient the building towards the large park in front of it and designing for most of the houses to have huge terraces with unparalleled views. The compositional vector gives the building a coastal aspect, almost nautical, but is like buildings that have sea views, Terrazas del Lago grew under the influence of a very similar pole of attraction.

For formal consistency, the curve of the corner is transferred to the successive terraces, creating, along with a slight inclination of the breastplate, its smoothest and most organic finish.

In a minimal order, a facade shaped by a heterogeneous texture is designed, breaking the typical paradigm of the horizontal bands.

From there, each detail was designed as an echo of that first curve, which resonates in every detail of the project, from gardening to the design of the dividing wall, from the paint in the corridors or garages, to the fencing
The building is not just a “pretty face”, it is one of the first buildings in Madrid with energy rating ‘A’ and incorporates a series of technical innovations that enable the resolution with purity of its forms, as well as an interior layout that optimizes the rooms so that there are no curved walls, solving almost all the curves thanks to the terraces that give the name to the promotion.