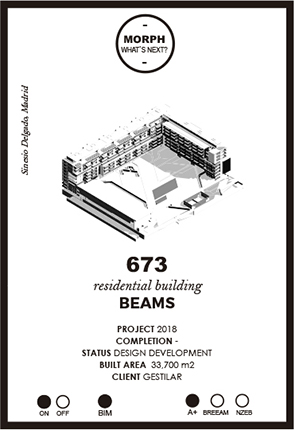 Out of the box:

The best ideas are often insultingly simple; use the liquid of a Container as structural support (tetra brik), simply fold a wire to hold sheets …. Recently, we discovered the stapler without staples, and 10 years ago someone noticed that people have a pointer incorporated in each hand and revolutionized the market for palms and the mobiles.

Architecture is not an exception; since Wright’s Guggenheim is the one who analyzed that to see a museum, instead of always  climbing stairs or entering and leaving the rooms continuously, you could visit in a downward spiral, … or Mies Farnsworth House, why?

Why put walls if the greatest value of this enclave is the landscape? …

This project is born from a very simple idea, what could our children have made: why do we make first floors or second floors? or low floors if we sell more expensive floors, why not? Do we only make tall floors? … the first reaction, that is: love, stop saying nonsense, your father knows what he is doing; we build low floors because the tall floors are deposited on the ground floors. Good, When the idea went straight to the wastebasket, we noticed that it could actually be an excellent idea for the promotion.

The resource we have used is very simple: we have eliminated the ground floor, the first floor and the second floor and instead we have begun to build the third floor with large terraces that are more restrained in the following plants.

Based on the prices of the area, we have calculated that the increase of value that is achieved by performing this operation is several million euros compared to other alternatives with very limited investment in the structure of the building and generating a series of benefits.Why has nobody done it before? Because it was an idea too simple, and architects tend to tend not to ask the right questions; We prefer to ask ourselves, how will I win the next prize? What do I do so that my building has the highest possible value?

This is a very neutral lot. That is, the influences around which organize the building are very dim, there is a view, but very far and very skewed of the park of Valdebebas, we have dotacional  elements over which we dominate both south and west, relevant streets but not determinants and we suffer from artistic-architectural landmarks, even landscaping issues due to the position and height limitation of the plot.

The greatest influence when designing and composing the building is to the south, achieving homes with the best possible light (south-southwest), which are protected from heat in summer (terraces and pergolas to the south and double orientation) and capture heat in winter.

To tell a little about the whole functional scheme of the building, we have made a commercial base that faces three streets and divides them, as the statement says of the contest, in premises of 150 m2. The separation of homes and premises allows greater comfort and value for lower houses.

As for the common areas, there is a very interesting effect on them: we have taken advantage of the topography to enter our homes at ground level, but with respect to some streets, we are entering from a first floor; what we do in the background with this resource is to provide security to the promotion. The promotion does not have a fence that separates it from the street but there is a true separating level of the interior, with which, families go in

Be assured that if you have your child on the ground floor playing in the pool or on the swings, it is very difficult to go outside, to see them or to interact with people from outside. We really believe in a very protected environment although very interesting, since it has an open and private character thanks to the arcades.

And what do we do with the offices? As you know, we like to give a twist to things. In our opinion, there is no profitable market for offices right now in Valdebebas. We propose, if it seems good, to make a series of loft spaces. We have created tiny units, which can be joined together, cells from 45/50 m2 that can be combined with each other. If the time comes that  there is a market for offices, perfect, the surface can be left perfectly diaphanous and can be used for offices. If there is not as we fear, we could really generate some loft there with very little impact of common that could complete the mix of the promotion.

When we generated the portico to generate houses of greater value, we also realized that the block generated as a bridge could be very massive. We developed a facade that fragments the solid so that it ends up being perceived as a set of beams or horizontal elements that help us see the building as something lighter. Later the next movement that we apply is to give it some movement additional to the facade generating these boxes in different levels, moving them and opening the corners to emphasize the horizontality of these units. We generate with it, if you look at the table of surfaces, many meters of open terraces, from the 1st floor, passing through the 3rd, the 5th the attic and the low-attic.

The details of textures, the warmth of the touches of wood, common areas with a generating idea as a tree and multiple leisure ideas … are simply the result of downscaling and working on the project.

Our proposal has developed and covered each and every one of the houses. Honestly, I believe that we are unable to deliver a project without being sure that it can be developed in its entirety. Each and every one of our homes are commercial and external in our opinion, although we are sure that they will improve during their development with the contributions we always receive from Gestilar.

I would like to finish at the beginning, because of the idea that has moved us in our project and that, as in those dominoes games that are so amateur in the Netherlands, where a record ends up triggering a reaction in chain, has originated this creation whose uniqueness and authenticity guarantees the novelty of its approach.