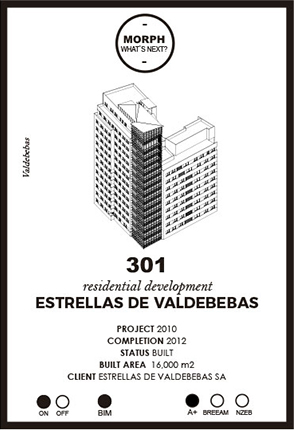 With a practically unarmed study, we received the commission for a VPO project in Valdebebas, after several very precarious years of work. It was also the first project of a large magnitude that I signed with Miguel and Rafael Pradillo.

Once we saw the plot, we designed a building with two bodies and a glass joint in the corner. The idea was to keep in mind the imposing views that said what the point of the building was going to have, in the manner of the London Hi-tech residential. The idea aroused certain misgivings initially, as a novelty, but it became very successful at the time of the choice of housing, taking over many of the first elections held by the cooperative members.

The work was done with few means and there are aspects of it that reveal a certain inexperience on my part as designer and as D.O. but also revealing many interesting ideas.

The result is night and day; I was wrong in the choice of the brick to be condescending with the builder, the design of the brick panels is very conservative, the stepping of terraces was revealed as a bad solution, the curtain wall top and its sun protection are very improvable and the innovative ground floor solution that we implemented, required a better design of sun protection.

All in all, we had some relevant successes:

– The access was very stately, with several successful designs, as the number itself.

– The common areas have a simple, economical and attractive design, which is the scenario of the game Monument Valley

– The curtain wall is resounding, singular and a powerful solar collector that allows to dispense the heating 99% of the year.

– The garage is different, with walls decorated with a bar code and the pillars with the faces of different colors to achieve changes of environments within it as it progresses with the cars

– The storage rooms were very fun, with paint in three colors that rose from the floor through the walls

– The gym has spectacular views that can be enjoyed by all neighbors and the roof, born from the need to open a window, had to make a curved ceiling to the ceiling, which was repeated throughout its perimeter.

– The lawn of the pool was raised by the breastplate, creating a friendly and natural space and the black and white paint of the pool structure stylized the same