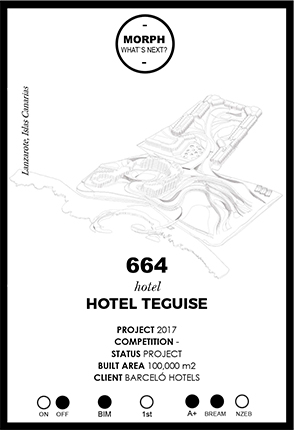 The first time you travel to the heart of Lanzarote, you try to digest the devastating beauty of the virgin nature ruined by volcano. The landscape takes you to prehistoric times when there was no life beyond the sea. It leads you to imagine about the first settlers, the worshipers of gods in the form of mountains that spit fire.

It was a challenge to desecrate such a beautiful landscape with architecture, even in a developed area of the island. One feels the guilt inherited from the last urban development of the Spanish coast.

The other challenge we found in Lanzarote was to make a contribution to the architecture of an island where César Manrique’s masterpieces are built, which we took advantage of and respected the qualities of the environment and Fernando Higueras, who created his own landscape and integrated it with the island adopting to its vegetation mantle.

The pre-existing buildings are a photocopy of a copy of the magnificent Hotel Las Salinas by maestro Higueras. The first temptation we had, seeking the integration of the new hotel, was to try to create a stepped and faceted hotel, almost cubic, so together they spoke the same language.

But  contrary to how the saying goes, I believe that “the good is the enemy of the best” and the possible future was displaced by the building that we developed.

Once it was put on the table, the idea immediately came together. The building had to try to return a part of what was lost to nature, it had to connect, as ivy does with the earth and the wall, on which it grows with the sun who is sought by our customers. It had to grow on the existing buildings in such a way that any client could move in flip-flops throughout the complex and not be bothered about the safety of their family. It had to be done with sustainability as the priority, by principles, by image and by economic interest. The complex should be perceived as a unit and as a referent of a different form of the actual that puts value on the asset and the brands that operate with it. The idea of generatrix has no fixed limit, it was born to evolve and adapt to the geometry in its path, to integrate in the field, to be confused with it.

This is how Hyperion was born.