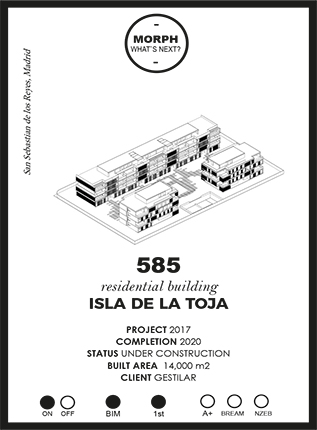 This project is based on our series of illusory fragmented works, achieving light and dynamic buildings, not intending for any repetitions, but rather an evolution of a proven formula. The different volumes are even more convincing than the ones in our previous works and the composition they offer is more varied and daring.

Urbanization has taken an important role from the very beginning of the project and it implements elements of parametric geometry combined with rectilinear units that together form an attractive and singular organic whole. It is in an embryonic state of the project but you can already guess the enormous variety that these pieces can give, from a bench to a light fixture like the ones  Michael Jackson stepped on in the Billie Jean video.

The volumes have been generated to achieve the most open spaces possible and the highest quality in each home. When creating the south block, which is divided into two separate blocks with diaphanous floor plans, the blocks with little corners and nooks and the enclosed common and linear spaces were avoided.

Nowadays there is the popular term “Wow!”: Used when something hits you unexpectedly and surprises you. In Spanish it sounds weird, but it is perfectly understood “This is wow!”. When we saw the first renderings of the project, we had positive and negative thoughts on the building but a good result in general. We were still awaiting another one, the view of the space between the two south buildings. When it was completed, a “Wow!” was loudly heard.

The final, more commercial rendering, does not just hit you like the gloomy sight we got with the first tests but it also transmits a feeling of contemplating something beautiful, articulated, open, I can be wrong but when I saw it, I thought “this is not a sequel, it’s a 2.0 evolution”.