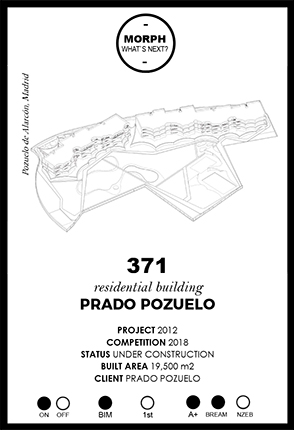 This project is the first of our most unique projects, the most “Morph”. This project was the definitive breaking of the shell for me.We have always been told to be discreet, not to screw up, not to complicate our life, not to be naive, that things are  as is and we end up willingly confined in an invisible cage, we remain inside because we think we are not worthy of getting out, and those are our boundaries. One day you decide to take a risk and cross the imaginary line that had kept you prisoner without any power but fear.

When I took this building´s terrace sketch to Jose Luis with all doubts and insecurity in the world, he supported the idea and since then I have never taken a step back. I realized dreams are more real than the status quo because everyone has dreams and with determination, everyone will embrace your dreams and make them their own.

In a more prosaic way, the project speaks for itself. The plot has a large number of protected trees that used to “bother” while designing. Most of the time big ideas surge from a difficulty that pulls us out of our comfort zone and forces us to make something different. Instead of segregating the building and clogging the free space, like a judo fighter, we used the enemies force in our favor, taking the footprint of the trees as a “leitmotif” to generate big terraces facing towards the green area of the plot. The idea is sublimated in the exempt block that was assigned in phase 2 of the promotion that even has a tree inside of the footprint itself. The north facade of the promotion was in limbo for over a year, due to the difficulty of creating something coherent with the south curved facade. The final design is similar to the interior facade, thanks to the customers who encouraged us to make a daring design that would try to emulate the level of the star facade.

The landscaping and urbanization deserve a separate mention; an organic design without concessions and almost 20,000 square meters that even contain a running circuit. The community room, connected to the pool, has a design that makes it invisible from the dwellings.

The development of the project is becoming an exciting fight, one that we cannot give in by a millimeter to be at the level of that blurry and bold, uneven, first sketch.