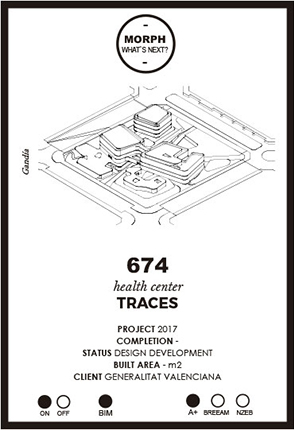 If one observes the plot in which our plot is inscribed, drawn with tyrannical lines, they do  not fail to notice how distant it is from the human scale, of those plots in which there were spaces for recreation and interrelation, which had been designed by the riverbanks of rivers and streams, roads and canyons … our proposal aims to take a step backwards to get back to the city part of the spatial quality that was once treasured.

We propose an erosion of the capable solid that exists in the plot in the same way that the Del Mar water or the east wind erodes a rock, only that in this case the erosion is generated by the trajectories, the future steps of the citizens of Gandía that go to recover a space that had been denied by the large blocks that populate the environment.

The project refuses to generate large continuous volumes and opts for organic, residual forms, which, like small cells, have the imprint of their gene generator.

The choice of a material as Mediterranean as terracotta and the use of lattices, is the result of applying criteria of sustainability inherent to what the architecture of the XXI century should be and the search for the creation of spaces that relax, comfort and cure body and soul.